The Monocoupe was the brainchild of Donald Luscombe, who flew a Curtiss Jenny to further his advertising career in the 1920s. He became frustrated by the exposure of flying the open-cockpit airplane, which required flying gear like goggles, helmet, and heavy clothing. Luscombe set out to design an airplane with an enclosed cabin. When completed he called the plane a Monocoupe by blending "monoplane" with "coupe," the enclosed two-door cars replacing open top roadsters and touring cars in the 1920s. 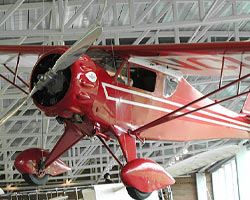 By the 1930s, Monocoupes became popular not only for their comfort but for their speed and efficiency. Depending on the engine, their top speeds ranged from 120-148 mph. In fact the number "110" denotes that this Monocoupe originally had an 110hp engine. Buyers had the option of a Monocoupe 90, a Monocoupe 125, or even a Monocoupe 145.

The Monocoupe was a popular sight at the College Park Airfield, particularly in the early-and-mid 1930s when the airfield was often front page news with its numerous air shows and air races. Many well-known pilots raced in the speedy Monocoupe, including Phoebe Omile and Helen MacClosky, both frequent visitors to the airfield.

In the 1930s, this Monocoupe (serial no. 6W43) was owned by race pilot Peter Brooks, who used the plane to compete in the National Air Races. The Museum purchased the plane in 1997.